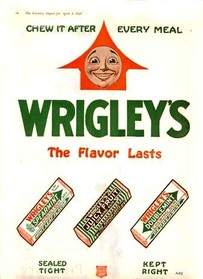 Companies began hiring psychologists to study the way in which their products appeal to people's mind.
"Advertising a product changed from simply announcing the existence of a product in a dull, dry fashion to persuading the public they needed and deserved to own the product."
-eyewittnesstohistory.com explains how the advertising started to change in the 1920's. It became more complex and tried harder to sell companies products.
By conviencing the public that they needed their products and exploring how to make their products more appealing, the results were greatly benificial. They benifited the companies selling the products as the consumers started to buy more and more of their products.

Convincing the public that they needed a product:

Here, a company convinces that mouthwash is a necessitiy to the consumer. This change in the way of advertisements greatly defines advertising in the 1920s.
"Demand for the multitude of new products that emerged in the 1920s was pumped up by a new industry, advertising, which developed new methods of enticing buyers to desire new products through new media like the radio. The minstrel-show radio sitcom, Amos n' Andy, became a smash nationwide hit..sponsered by Pepsodent toothpaste.Through such sponsorships, the advertising industry grew in perfect harmony with the emerging industries of mass culture—especially network radio and the cinema. The emergence of broadcast networks and proliferation of studio-linked movie theaters made possible the development of a robust nationwide mass culture. For the first time, a Detroit factory worker, a San Francisco longshoreman, and a Birmingham domestic could be expected to enjoy the same radio programs and watch the same films... and to smoke the same cigarettes and use the same toothpaste promoted on screen and on the radio."
-This was said by a proffessor who discusses what advertising allowed for people.