"Good-looking as that car is, its performance is better than its apperance. We don't brag about it, but it has done seventy-one miles an hour. It will ride along a railroad track without bouncing...It's the smoothest thing you ever rode in." -Said a Ford salesman who discussed the qualities of the new and transformed automobile. He likes the performance of the model a as opposed to the model t.

The impact of the automobile

Above, a woman discusses the convince of automobiles and why she likes what they have to offer car buyers. It allows her to do a lot more things than she was able to before.

Here are two different perspectives from ministers discussing why they don't like automobiles. Different people have very different ideas regarding the automobile, some more positive than others. The Lutheran minister only likes the advantantages of it in certain seasons. The Methodist minister doesn't like it at all and he feels that it detracts from his church. 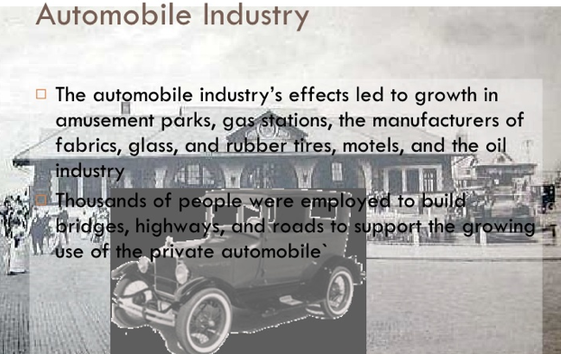 The powerpoint slide above is another example showing the new effects of the automobile and what was built as a result of it.